The Longest Trek: My Tour of the Galaxy 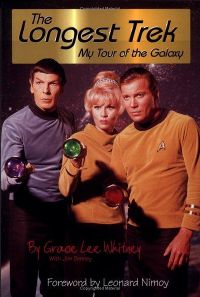 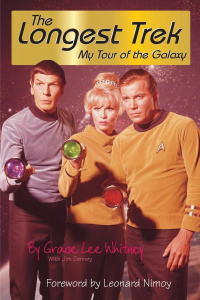 She opened for jazz great Billie Holiday, clowned with Phil Silvers in Broadway's Top Banana, shared an upper berth with Marilyn Monroe in Some Like It Hot, flirted with Jack Lemmon in Irma La Douce and murdered the same man over and over again on The Outer Limits. Her extensive TV credits include Surfside Six, Bonanza, The Untouchables, Gunsmoke, The Big Valley, Hart to Hart, Batman, and Bewitched, just to name a few.

In her dream role, Gene Roddenberry beamed her aboard the Starship Enterprise as Yeoman Janice Rand for the original Star Trek series. But a terrifying sexual assault on the studio lot and her lifelong feelings of emptiness and isolation would soon combine to turn her starry dream into a nightmare.

„I had a hole in my gut with the wind blowing through. I was in pain. I craved validation. And I looked for solace in alcohol, drugs and sex.“

The life of Grace Lee Whitney is an amazing story. It is the behind-the-scenes story of Hollywood, it is an untold story of the Star Trek world, but above all, it is the story of hope, the story of an awakening, the story of a woman who had to sink to the deepest depths before she could rise to find her true self.

„People ask if this isn't embarrassing to talk about, and well, yes, at least it was in the beginning. But I learned something very important. You're as sick as your secrets. Once a secret isn't a secret anymore, it loses its power over you.“

Grace Lee Whitney has gone where no woman has gone before – join her. It's worth it!

Personal, moving, and powerful… If you think this is simply another book of Star Trek anecdotes and inside jokes, take a deep breath and plunge in. This is a Star Trek book which will transform people's lives.